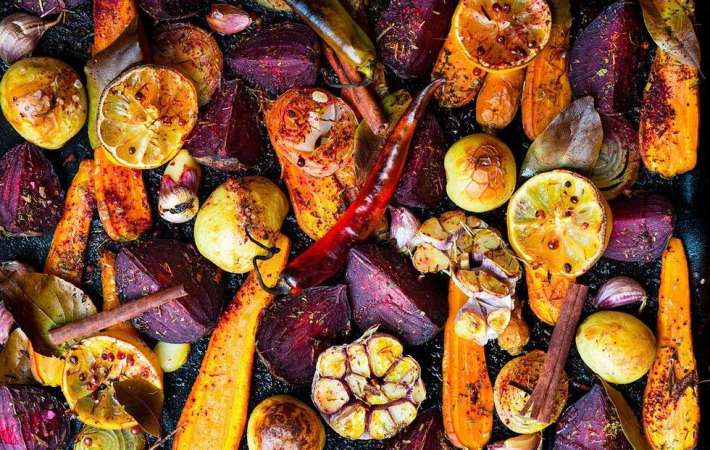 It might seem counterintuitive, but Thanksgiving is actually the perfect time to broaden your collection of vegan recipes. From restriction erupts creativity!

Whether you’re having an entirely vegan Thanksgiving, or you’re picking and choosing a couple of vegan Thanksgiving recipes to guarantee there’s something for everyone, your guests will welcome the change at your table (as long as you flip Tofurky the bird). Make enough for everyone, not just the vegans, because those omnivores are going to be jealous.

This year, every guest at your table will have a dish worth giving thanks for. Here are 15 vegan Thanksgiving recipes for your holiday table:

If crisp autumn weather had a taste it would be this vegan Thanksgiving recipe for fall slaw. It’s loaded with fruits and vegetables in just about every shape and texture, and topped with a seriously delicious tahini-apple cider vinegar dressing that brings the whole thing together and sunflower seeds packing extra nutritional punch and protein.

Serving a bowl of raw kale to your vegan guests will ensure you catch some serious flak from even the most passive of hippies. To make sure that doesn’t happen, this vegan Thanksgiving recipe for kale salad with white beans, garlic croutons, and a simple tahini dressing creates substantial and nutrient-rich a flavor explosion in the mouth.

Perfect for cold November weather, this hearty vegan chili is almost filling enough to serve as a main course. Sweet potatoes, olive oil, cumin, oregano, black beans, and a variety of vegetables stew in a big bowl of cozy that bridges the dietary divide appealing to vegans, meat-eaters, gluten-free-ers, and vegetarians alike.

This vegan cornbread is the perfect balance of savory and sweet, rich and light and it pairs amazingly with that black bean sweet potato chili. Coconut oil adds buttery texture to this vegan Thanksgiving recipe, which also draws on cornmeal, almond milk, apple cider vinegar, and a splash of maple syrup for a touch of sweetness and autumnal flair.

This vegan recipe for Thanksgiving stuffing is stunningly beautiful and delicious. Butternut squash, Brussels sprouts, apples, shallots, onion, celery, cranberries, walnuts, a host of herbs and seasonings, and (of course) a hearty bread all combine to make colorful, wholesome, good-for-you take on the Thanksgiving classic.

Oven roasting brings out the best in Brussels sprouts. In this vegan Thanksgiving recipe, the oven’s heat caramelizes the leaves, turning them lacy and crisp while tenderizing their tough core. And that’s just with a basic sprinkling of salt and pepper! Once roasted, toss them with balsamic vinegar to turn them into a showy little number.

These tasty vegan mashed potatoes are fluffy, creamy, buttery, and loaded with roasted garlic and chives. All you need in six ingredients and before you know it you’ll be staring into a vat of thick, luxurious mashed potatoes with a sweet garlic tone. They are perfect as is, with a giant scoop of vegan butter, or with vegan gravy.

This vegan gravy recipe has you covered. Literally. Pour it on mashed potatoes. Pour it on everything! This vegan Thanksgiving recipe for gravy is smooth, savory, has flavor for days, and is ready in minutes. Because you’ve already got enough on your plate as you start preparing for Thanksgiving.

A vegan version of a childhood classic, the lentils and walnuts in this vegan Thanksgiving recipe evoke the dense texture of traditional meatloaf nicely and give it more texture and chew than any meatloaf ever. It also gets a punch of flavor from garlic, onion, and apple, and satisfying crunch from walnuts, carrots, and celery.

These veggie-packed vegan pot pies are hearty, comforting, creamy, soul warming and topped with a super buttery, flaky crust and they are a great main dish for all the vegans at your Thanksgiving table. Don’t be intimidated by the long and seemingly complicated ingredient list. They are easy as pie.

This vegan Thanksgiving recipe for roasted acorn squash stuffed with wild rice salad is so beautiful it could do double duty as the centerpiece. Simply roast up an acorn squash and then fill with an impressive, yet simple wild rice salad with crunchy pecans, tangy cranberries, fresh basil, and a sweet jolt of fresh orange juice.

This vegan silk chocolate pie recipe is served in a light, flaky crust and filled with smooth chocolate that’s not too rich, topped with cold, fluffy whipped cream and bits of chocolate shavings. It tastes like silky chocolately heaven and no one will ever know it’s made from things that are actually good for you.

This vegan Thanksgiving recipe is a straightforward, fuss-free, no-nonsense apple crisp. Coconut oil helps to create an irresistibly sweet and buttery topping without so much as a hint of butter. It can be enjoy for dessert by all, or enjoyed for breakfast…if there are any leftovers that is.

These beautiful pudding cups serve as the perfect finale to a vegan Thanksgiving feast. Arborio rice combined with almond milk, orange zest, pumpkin puree, and a host of Thanksgiving-esque spices (think cloves, nutmeg, allspice, cinnamon, and ginger) create an elegant end to a wonderful meal that everyone will be thankful for.