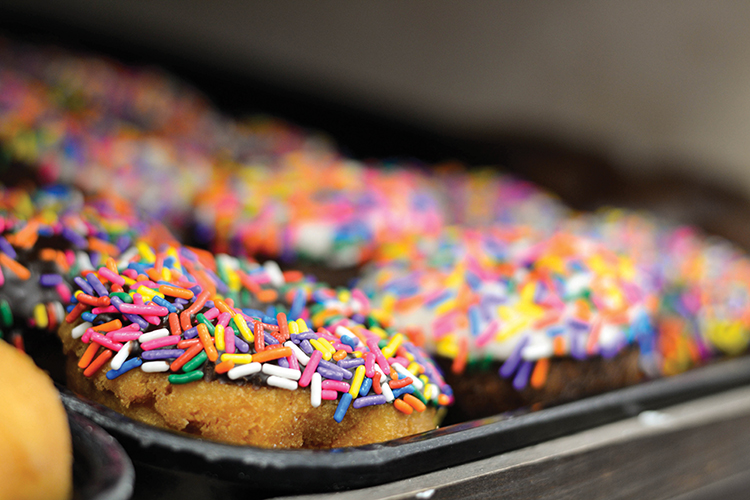 Every small town has the one place. That neighborhood gathering place where community happens. Where the spirit of camaraderie is seen and felt.

For 35 years, Dale’s Donuts in Stevensville, MI was that place.

Born and raised in the area, Bill and Joy Bancroft describe Dale’s as the donut shop they grew up on. Bill was a frequent customer and Joy worked there as a waitress in high school. When Dale’s closed its doors in 2010, they realized there wasn’t just a donut-shaped hole left in their morning routines, but in the community as a whole.

So after deliberating on it for over a year, Bill and Joy decided it was time to resurrect the tradition of Dale’s Donuts. They took a leap of faith and officially opened Red Coach Donuts in June 2018.

The name “Red Coach Donuts” pays homage to another local hangout called Red Coach Inn, which was owned by Bill’s parents. After his dad passed away, Bill’s family sold the inn, but Red Coach remained one of Bill’s favorite childhood memories.

Although Bill is already a business owner, the couple had no idea how to go about running a donut shop. Their very first move was to reach out to the retired owner of Dale’s Donuts for advice. “The first person we went to was Dale and got his blessing,” said Joy. “He sat down with us and told us everything he knew. He even drew illustrations of the kitchen and made lists of all the equipment we needed.”

It took about eight months to get Red Coach Donuts up and running. A time during which they remodeled a fixer upper downtown Stevensville, which was formerly a revolving door of lackluster businesses, to feature a modern farmhouse design inspired by the popular Silos Baking Co. in Waco, TX.

They also hired locals Amanda Nitz, fresh out of pastry school, and Stephanie Harrah as the pastry chefs. From the very beginning Amanda and Stephanie have been responsible for creating all of the recipes, which showcase tastes and textures that are simultaneously familiar, yet not quite like anywhere else.

Although Amanda and Stephanie quickly earned the shop a reputation for churning out some of the absolute best donuts around, Red Coach Donuts is more than just another sugar-slinging pastry shop.

It’s evident right when you walk in and see the Give Back Board hanging on the wall. “The Give Back Board is opportunity for customers to pay it forward by buying a donut for someone and then posting a note indicating they have one waiting for them the next time they come in,” says Joy. “You can leave a note for someone specific, leave it blank, or identify a particular mood or need.” And that’s just the beginning of it. Joy also says she continually sees customers paying it forward in a multitude of ways that don’t fit within the confines of the board.

Whether you find yourself on the giving end or the receiving end of this abounding generosity, when you finally get up to the counter, you’ll discover there are more options that fit within the confines of the menu board.

You can go for a cloud-like yeast donut with a delicately crisp exterior containing a soft, chewy interior, which forms the ideal canvas for a satiny glaze. Or opt for a bevy of tender, moist, perfectly dunkable cake donuts of endless variations to suit your whims. Or a classic Long John swollen with creamy fillings and topped with a generous schmear of frosting. Or an old-fashioned donut with a deliciously craggy crust. Or a Bismarck blizzarded with powdered sugar and jam-packed with bright, fruit-forward fillings. Or. Or. Or…

Flavors rotate daily with upwards of 25 donuts on display each day, which can prove problematic to the indecision prone, especially when weighing options like boundary-pushing explorations of new flavor combinations and decades-old institutions that aren’t going to change and don’t need to. Fortunately, there is no wrong decision.

You don't need anybody to tell you who you are or what you are. You are what you are!
John Lennon