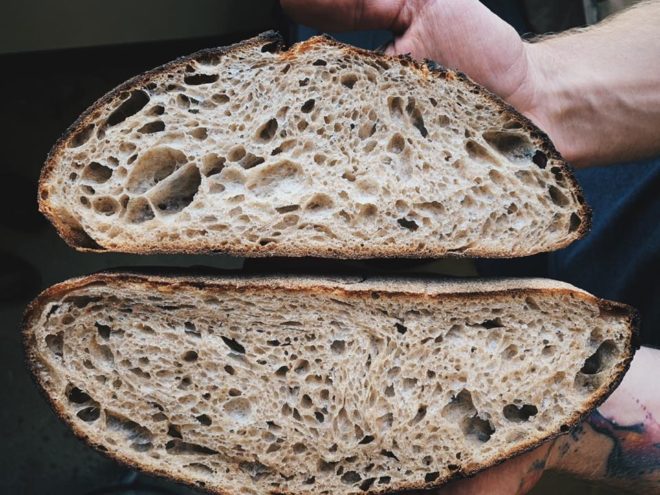 Six days a week, yeast shepherdess and flavor artist Lauren Barry is busy filling her commercial kitchen in LangLab with aromas that have the ability to shatter the willpower of even the most ardent paleo dieter and make any gluten avoider weak in the knees.

Lauren is the chef and owner of The Elder Bread—a small bakery and one-woman show supplying local restaurants with loaves of naturally leavened sourdough bread and a growing array of sourdough delicacies including English muffins, donuts, and pretzels.

Before opening The Elder Bread and moving into LangLab in January 2019, Lauren spent her days honing her craft as chef for nearly 10 years in northern Indiana and Chicago.

The most recent, and perhaps most notable, bullet point on her resume was earned in the kitchen of the Chicago restaurant Kitsune. It’s there where she learned how to make bread with a sourdough starter from a coworker who interned at Noma—a two-Michelin-star restaurant in Copenhagen that has taken the top spot on many a “Best Restaurant in the World” list.

“They just told me, ‘you’re going to learn how to make bread,’” says Lauren. “So I threw myself into the fire.”

Lauren speaks so modestly of her breadmaking skills, you would never know she was the woman behind the bread at Kitsune that the Chicago Tribune described as “just short of life-changing.”

After her stint at Kitsune, Lauren returned to South Bend with Nancy—her 14-year-old sourdough starter that breathes life into each and every loaf of bread she makes—and began making bread at home. It didn’t take long before an overwhelming demand to turn her breadmaking hobby into a business sparked the launch of The Elder Bread. Now, Lauren is churning out about 150 loaves of sourdough a week.

Lauren uses 100% organic flour from The Mill at Janie’s Farm, located in a one-horse town in Illinois. “They have some of the best flours in the country,” says Lauren. “They grow all different kinds of heritage grains and mill their own flour.” Not only are these stone-ground, organic, whole-kernel flours nutritionally superior, they also play a role in producing those exceptional flavor profiles woven throughout Lauren’s bread.

Lauren’s signature sourdough boule is gorgeous inside and out—an ethereal balance of polarizing textures and flavors. The crust is beautifully rugged, crackly, and just blistered. Inside, the crumb—checkered with marble-sized nooks and bubbly pockets—is so tender and glossy it’s almost custardy. It’s silky and chewy and there’s a subtle tang that kicks your salivary glands into gear before layers of caramelized flavors usher in the nutty, sweeter notes.

Beyond her signature boule, Lauren also makes an oat loaf with cumin, chia, and flax. “I also want to get into baguettes and pan loafs,” says Lauren. “But I only have two hands.”

Despite only having two hands, Lauren still seems to find time to sling sourdough pizza every other weekend at LangLab.

Her poofy-rimmed crust with a leopard spotted char is almost enough to make you all but forget about the toppings. Almost. The pizzas come topped four ways, including Margherita-style with fresh mozzarella, tomato, and basil as well as a seasonally rotating pizza built with a strong locavore ethos. “I just like to keep it simple and use really beautiful ingredients,” says Lauren.

You can find The Elder Bread at Purple Porch Co-op, Zen Café, Bantam Diner, Oh Mamma’s, and Crooked Ewe. But beware—it may forever render all other breads disappointing.