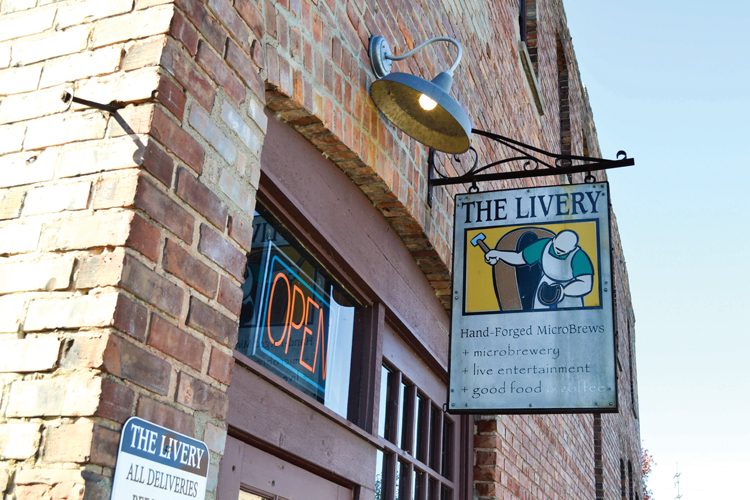 In a century-old former horse livery, which retains its exposed beams and feed elevator descending from the ceiling, the gathering place culture continues to thrive within the red brick walls of The Livery Microbrewery.

Located in the Arts District of Benton Harbor, Michigan, The Livery has been the neighborhood’s cornerstone since opening in 2005. On any given night, the steady, rhythmic pulse of the bass reverberating out into the streets can instantly be recognized as the beating heart of the community.

Entertainment and live music are regularly featured at The Livery. The rustic charm and warm ambiance create an inviting atmosphere that welcomes local bands to cut their teeth on stage as well as a variety of renowned nationally touring acts. Each year brings bigger and better performances and a new crop of emerging artists—all of which are ushered in by The Livery’s can’t-miss New Year’s Eve Party.

As one of the first craft breweries to take root in the Michiana region, The Livery began cultivating its large fan base with its hand-forged craft beer—a loyal following now extending to its culinary offerings.

The food has always sung backup for The Livery’s dynamic live music scene and award-winning craft beer. But now, kitchen manager Becky Wehmer is making it the star and pushing it center stage into the spotlight.

A push observable anytime a member of the kitchen staff walks up the stairs during a show, carrying a plate of something that unfailingly cues a chorus of “Mmmm, something smells amaaazing.”

That something could be any number of items on the menu, which tells a story of collaboration and creativity with fresh, seasonal, and locally sourced appetizers, oven-toasted sandwiches, hearty salads, and hand tossed pizzas.

In a world full of pizzas, The Livery’s top the charts. With a pinch of ingenuity, Wehmer brings a whole new dimension to pizza by utilizing spent grains, a by-product of the brewing process, which impart a subtle complexity by adding a chewy texture and a mild nutty flavor to the pizza crust.

“The brewers save the spent grain and we use it to make pizza dough from scratch everyday,” explains Wehmer. “What we don’t use goes to a local cow farm.”

Becky Wehmer has been the kitchen manager at The Livery for the past three years. A glass artist by trade, she’s able to bring her artistic background into the kitchen by concocting original specials on a regular basis. Her creative process includes bouncing ideas off The Livery’s staff and customers and deliberating on seasonal ingredients and flavors. She also loves to experiment with the fizzy bite and soft undertones that a smooth hand-forged Livery brew is able to lend to an array of dishes beyond beer cheese.

Some of her recent inventions that have customers calling for an encore include the “Squashsage” pizza featuring a housemade white sauce, Italian sausage, and a mix of delicata and butternut squash simmered in butter, brown sugar, and sage. Another is a seasonal pizza starring garlic marinated gala apples and Trippel Weizenbock soaked raisins.

The Livery is incredibly intentional about cooking from scratch and sourcing locally as much as possible. This is a challenge Wehmer manages to overcome even in the winter as she sources lettuce grown in hoop houses year round from Mud Lake Farm in Hudsonville, MI as well as fresh loaves of Bit of Swiss artisanal breads for sandwiches. During Michiana’s more fruitful months, farm fresh ingredients come from vendors including Sommerfeldt Farms, Palis Fruit Farm, and Ma’s Organic Garden.

By sourcing ingredients from nearby farms and bringing new business into the city’s core, The Livery has done more than just up the availability of good food—they are transforming Benton Harbor from a food desert into a food hub.

The building has played a key role in the community for more than one hundred years, but the last 13 have been particularly phenomenal. The Livery Microbrewery has been instrumental in transforming a neighborhood into a community by being a place where life is celebrated through exceptional entertainment, outstanding craft beer, honest food, and camaraderie beyond compare.

The only true wisdom is in knowing you know nothing.
Socrates