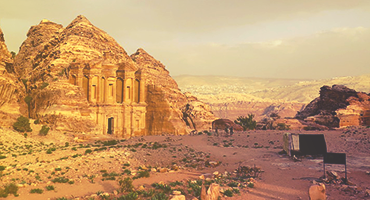 Beneath the mountain of unenthusiastic media exposés erected by persistent newscasters lays a diamond in the rough. Endlessly fascinating and ripe for exploring, the often misunderstood Middle East region has an extraordinary mix of antiquity and modernity. A true understanding of the Middle East begins with language study. Language schools in the Middle East offer seemingly endless options for those interested in learning critical languages like Arabic and some of the more indigenous languages. Oh, and there’s hummus. You will indefinitely spend your Arabian nights dreaming about floating in a pool of hummus on a freshly made pita raft.

Locations
What is commonly referred to as the Middle East encompasses the region of Western Asia, stretching from Iran to Turkey and extending to include Northern Africa. With one foot in the Mediterranean and the other in the Persian Gulf, the Middle East traverses white sand beaches, thriving metropolises, and ancient temples. The location of your language program in the Middle East will depend primarily on which language you choose to study, but here are some of the most popular locations to take language courses in the Middle East.

Jordan faces the challenges of modernization and growing urbanization, but remains one of the safest countries in which to gain an impression of the Middle East. Cities like Amman and Aqaba are blessed with a disproportionate number of natural wonders and laced with a spirit of generous optimism. It takes tolerance to host endless waves of incomers and Jordan has displayed that virtue by absorbing thousands of refugees, tourists, and language students as its own.

Dreams of Dubai lure students into the United Arab Emirates (U.A.E.) like fish to shiny objects. With an established reputation of prosperity and wealth, prospective students interested in language courses in the Middle East will do well to seek out language programs in this lap of luxury. Such fortune is evident by police cruising the streets in Lamborghinis or by the world’s tallest skyscraper, the Burj Khalifa. Spend some time exploring the surrounding deserts and wildlife, enjoying herbals teas in luxury cafes, and reenacting scenes from Aladdin in the U.A.E.’s many palaces and temples.

There’s no place that stirs up exuberant diversity quite the way Israel does. Residents resemble characters in a Middle Eastern epic, but synonymously defy stereotypes and convention. Their lives are played out against a backdrop of deserts, beaches, and cityscapes both modern and ancient. Few countries have so much geographic variety packed into such a small space. Swim in the Dead Sea, hike on the Israel National Trail, and explore the multicolored sandstone formations of Makhtesh Ramon. There are plenty of places to unwind too, such as the cafes, bars, and beaches of cosmopolitan Tel Aviv, or the boutique wineries of the Galilee region.

Take your time when choosing a language program in the Middle East, as there are many different types. For example, you can choose to do a short-term intensive language program at a private school or program. This will give you the opportunity to explore the city more and practice your newly acquired skills immediately. By immersing yourself in the culture, you’ll develop a clear understanding of nuances and norms that you otherwise might not pick up on.

Some students prefer university language courses, which are lessons that take place on campus in a classroom full of students. Others might be more drawn to smaller group classes in order to have more attention from their teacher. The good news for international students is that many Middle Eastern universities are rolling out new language programs in order to regularly attract foreign students.

You may choose to do a homestay so you can practice your language skills 24/7 and truly live in the language. Other students may be more drawn to a private tutoring experience. All lessons will be in a private, one-on-one setting, which will enhance your ability of learning at a faster pace. This is a great opportunity for students who might be looking for more than traditional classroom study and want to challenge themselves in an unfamiliar environment. If you need specific advice for a program you are considering, reach out to your program advisor to get those questions answered!

Costs & Affordability
Your cost of living (yup, you guessed it) will depend on the location of your language courses in the Middle East. Countries like the United Arab Emirates and Israel frequently rank as more expensive than Oman and Jordan, so everyday costs will be higher. The good news is there are plenty of free (the best four letter “f” word) activities to get out and enjoy on the weekends! If you are still being a fussbudget, remember that program fees often include everything from training to accommodation to 24-hour in-country support.

Accommodation & Visas
While accommodation varies between language programs in the Middle East, students can generally expect to stay with a host family or in a dorm-style situation with other like-minded humans that may be your predestined lifelong friends. Student housing usually comes in the form of a furnished apartment situated in a safe neighborhood. Living with a host family while learning a new language in the Middle East is the ideal way to be immersed in the language and experience the culture firsthand. Language schools and universities will carefully choose both options, so students will be able to rest easy.

International students are required to obtain a visa to take language courses in the Middle East, and, depending on the length of the program, and some students may even need to obtain residency. While this may sound like an overwhelming process, it is usually quite simple (and of course legal) and this responsibility usually falls on your program provider or host university, so don’t sweat it. For your own peace of mind, check out GoAbroad’s Embassy Directory for more information about visa policies in the Middle East.

Benefits & Challenges
Besides the academic benefits of language learning abroad, increasing your fluency in a foreign language will allow you to reap the rewards of engaging with locals in more meaningful ways. This will only further enhance your overall experience of living and learning in a foreign environment.

Conservatism. In order to acquire valuable skills, such as intercultural communication, it is vital to demonstrate a respect for the local culture. In some instances, this includes modifying behavior or clothing choices in public. Don’t worry; you probably won’t have to wear a full on burqa, but remember that respect and mindfulness is key. Learning how to conduct yourself while living in the Middle East will take time and patience, but nothing trumps the respect that locals will feel when you get the hang of it.

Culture Shock. The Middle East should really be called the “Middle of Everything” and that’s exactly where you’ll be. Completing a language program in the Middle East will push you so far from your comfort zone that you will forget what comfortable feels like. As a foreign student, while it may be challenging to adapt, you will discover a land of immense integrity and interest.

Fearless Factor. Out of misplaced fear and ignorance, the Middle East is usually the last place people look when considering international travel. Because of this, young adults who follow their wanderlust to the Middle East really demonstrate independence, strength, and a hunger to learn and grow. What employer wouldn’t want to hire someone who has already proven that they can do their work well despite being outside of their comfort zone?

Attention to Detail. Students who want to complete language courses in the Middle East will unquestionably grow another ear, specifically for detail. Amidst the numerous different languages, it is crucial to be able to detect quickly which one is being spoken. By the time you complete your language studies in the Middle East, Rosetta Stone won’t have anything on you!

If your lust for adventure is matched only by your passion for making a difference, turn off your TV, close your newspaper, and look to the East. Go forth, young language prodigy, and open your heart to a magic carpet ride in a whole new world!

It's not that I'm so smart, it's just that I stay with problems longer.
Albert Einstein