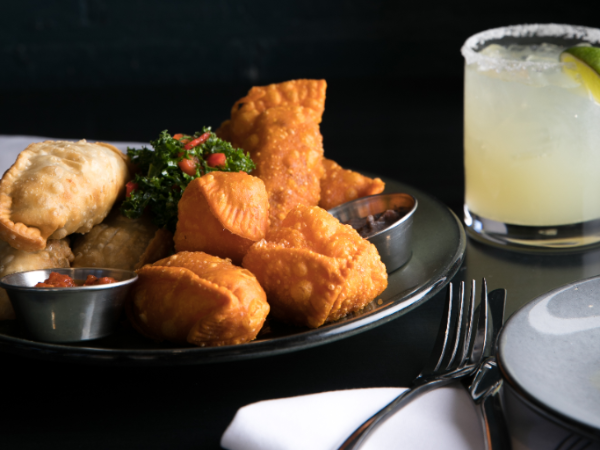 Livery South Bend is the second Livery location in CRG’s repertoire. The first is located in Indianapolis in a restored 1890’s building that once stabled horses as the city’s livery.

“We are excited to venture into South Bend,” says CRG President and CEO Mike Cunningham, who owns and operates 28 restaurants each with its own distinctive character and dining experience. The Livery concept quickly became popular in the Indianapolis downtown market and Mike saw it as an excellent fit for Eddy Street as well.

The concept: a neighborhood gathering place with a tapas spirit and Latin soul. This is fleshed out in the restaurant’s brand new interior, which was gutted and completely rebuilt to mirror the restaurant’s Indianapolis location.

Designed by Phanomen Design, Livery possesses its own unique style featuring geometric décor and brightly popping colors and with deep reds and gold-toned accents. It’s in this dynamic setting, studded with intimate booths, inviting tables, and an electric bar scene, where Livery invites you to come and let your appetite wander.

Mexican, Cuban, Peruvian, Argentinian, and Venezuelan influences all weave their way through the menu, offering gastronomy that’s familiar, but more fun and contemporary. And while the swanky interior and artistic plating on display at Livery may say upscale, the prices of the menu do not. All of Livery’s Latin American-inspired small-plates and entrées are priced below $20.

With modestly priced dishes, patrons are given the opportunity to settle in with a group of friends and order a wide range of dishes. Building meals incrementally and flitting noncommittally through small plates and main course selections is the name of the game at Livery.

One of the most popular among the small plates is the cauliflower appetizer—which is a true testament to just how good the food is at Livery. Because seriously, when have you every heard anybody say, “Dude, you have to try this cauliflower!”

Other favored small plates include any of their flaky empanadas filled with everything from chorizo and peach salsa to corn and truffle, as well as the yuca fries (like potatoes but sweeter and creamier) with the accompanying Spanish onion sauce that will make you forget entirely about the existence of ketchup. When it comes to entrees, the dazzlers are the red drum, sophisticated in both presentation and taste, and the skirt steak showcasing a gorgeous crust with a juicy center and tender buttery flavor that’s in a league of its own.

Then there are the libations. Livery sports a fully stocked bar featuring a mesmerizing exhibition of tequilas glistening on backlit shelves and tempting curious palates. Housemade specialty margaritas prepared with limes squeezed fresh every day are just one of their many signature cocktails that give a nod to Latin culture.

Put it all together—the ambiance, the food, the freshly made margaritas—and you have a well-curated culinary experience lacking nothing. Yet, as you are sitting there in the midst of it all, something still seems to be missing…

When you finally put your finger on it, you realize it’s the formality of it all. Livery never asks patrons to submit to the pomp and circumstance that typically heralds a fine dining experience. Instead, in a call to spontaneity and a rejection of ceremony, Livery invites you to settle in and savor the sociability that comes with ordering a parade of dishes to share and compare alongside good drinks and good company.